Margrete was the youngest daughter of Valdemar Atterdag and Queen Helvig. In 1359, at the age of 9 - 10 years old, she was married to King Håkon of Norway, who was then 19 years old. In Norway, she was placed in the care of a daughter of the Swedish saint, Birgitta of Vadstena, until she was old enough to live with her husband. In 1370 she gave birth to his son Oluf, who was to become king of both Norway and Denmark.

Timeline showing the different periods in Margrethe 2's reign as regent of Denmark.

She ruled as official head of state in Denmark only in the period 1387-1396, during which time she had the title: "Ruler and guardian of the kingdom of Denmark". But we remember her as "Queen Margrete". 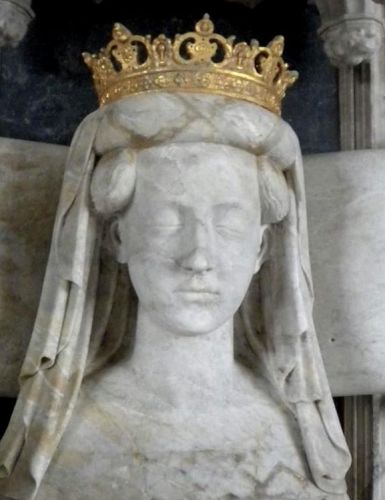 The figure does not look like a 59-year-old woman and most likely there is no portrait likeness. She was born in 1353 as the youngest daughter of king Valdemar Atterdag and his queen Helvig. She died in 1412 on a ship in Flensborg Fjord. Foto Jacob Truedson Demitz assisted by Emil Eikner for Ristesson - This image comes from the Southerly Clubs of Stockholm - Wikipedia.

However, her actual reign was much longer, since she ruled in Denmark already from 1376 as effective guardian for her son Oluf until his early death in 1387. In 1396 she had the 14-year-old Bugislav elected as king of Denmark, Norway and Sweden under the name Erik of Pomerania, being Valdemar Atterdag's great-grandson through his eldest daughter Ingeborg and her daughter Maria of Mecklenburg. Margrete remained the nominal ruler of the kingdoms until Erik was declared of age in 1401. But even after that, Margrete continued to have a firm hand in the kingdoms rule until her death on Flensborg Fjord in 1412.

Margrete 1. is known for having united the three Scandinavian kingdoms, Norway, Sweden and Denmark, which in practice already happened in 1389 after the victory over King Albreckt in the battle of Falk&#246bing, which is located between the two large Swedish lakes. When Erik of Pomerania was crowned king of these three kingdoms in Kalmar in 1397, the association was named the Kalmar Union.