Oluf was the son of King Håkon 6. of Norway and his queen, Margrete, who was the daughter of Valdemar Atterdag. After Valdemar's death in 1375, the then 5-year-old Oluf was elected Danish king in 1376 with his parents as guardians. 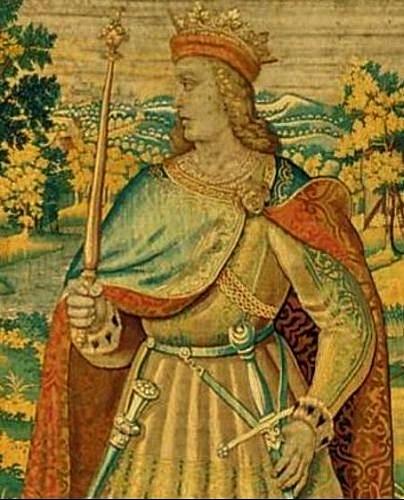 The young Oluf 2. in a section from the Kronborg tapestries made by Hans Knieper 1581-1584. The tapestries were made around 200 years after Oluf's death and cannot be expected to have portrait likeness. Photo Hans Knieper Wikipedia.

When King Håkon also died in 1380, the young Oluf also became king of Norway with his mother as guardian. It was the beginning of the royal union between Denmark and Norway, which was to last for 484 years until the Peace of Kiel on 14 January 1814.

It is said that Oluf came of age in 1385 at the age of 15, after which he traveled around and received homage at the county tings of his kingdoms. But his mother, Queen Dowager Margrete, was still the effective regent of the two kingdoms.

However, during a stay at Falsterbo Castle in Scania in 1387, he suddenly fell ill and died. Being only 17 years old and unmarried, he left no heirs.

Denmark's kings divided into Dynasties. But, all the kings - apart from Magnus the Good - are descended from "Hardegon, son of a certain Sven" who conquered a large part of Jutland around the year 917 as reported by Adam of Bremen in the section on bishop Hoger. The line of kings and the years of war and peace are the backbone of history - not that accounts of culture and the living conditions of ordinary people are not important - but without the line of kings, history can easily turn into a kind of fireplace passiar about aspects of Danish history that cannot easily be fixed in the memory. It is beneficial for clarity to divide the succession of kings - and thus the history of Denmark - into manageable sections.
The Knytlinge family got its name from a Hardecnudth, who was probably the son of Sven. He is also called Canute 1. and was with great certainty the father of Gorm the Old, as told by Adam of Bremen in the section on Bishop Unni.
Magnus the Good, who became king in 1047, was the son of the saint king Olav of Norway; his reign is a transitional period to the period of Sweyn Estridsson and his sons and grandsons.
The rival kings, Svend, Knud and Valdemar, from 1146 to 1157, all descended from Sweyn Estridsson; their time forms an interregnum to the time of the Valdemars.
Many historians, probably most, only consider Valdemar the Great and his sons, Canute the Sixth and Valdemar the Victorious, to be the Valdemars. But no one can have a patent on such a definition, and it seems pedagogically advantageous for the author to also include their less successful descendants - which are Erik Ploughpenning, Abel and Christoffer 1, Erik Klipping, Erik Menved and Christoffer 2. who was the last king before the kingless time.
Valdemar Atterdag recreated Denmark and thus the possibility of the Kalmar Union with Norway and Sweden, one might say - with a little good will. His daughter Margrete 1. became queen of this Scandinavian Union.
The first Oldenborg kings were also Union kings - but only for shorter periods.
The civil war, The Count's Feud, in 1534-36 was a turning point in Denmark's history. The Lutheran Reformation took place at the same time, and allowed the kings to confiscate the third of Denmark's agricultural land that belonged to the church. This fabulous wealth made it possible for them to cow Denmark's old nobility and after some time establish the autocracy that characterized Denmark's historical decline. In 1848, a democratic constitution was introduced without civil war or other violent events.
The Oldenburg royal line died out in 1863 with the childless Frederik 7. After that, Christian 9. of Gl&#252cksborg became king.

In Norway he was called Olav and in Denmark he was called Oluf. He was named after the Norwegian saint king, Olav the Holy, and that is almost the only thing we know about him. We know nothing of his personality or appearance, and there are no handed down statements or tales of special feats attributed to him.

For most of his reign, Oluf was a minor and his mother, Margrethe, ruled for him. At his death he was king of both Denmark and Norway. 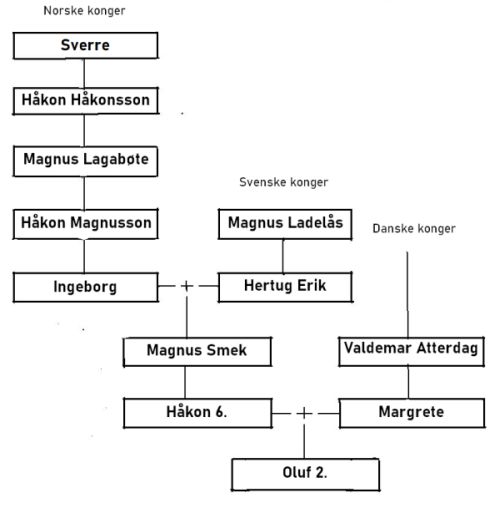 Simplified family tree for Oluf 2. On his father's side, Oluf descended from both the Norwegian kings since King Sverre and the first effective king of a united Sweden, Magnus Ladelås. Through his mother he descended from Valdemar Atterdag and the old Danish kings.

The young Oluf had the perfect family tree for a king over a united Scandinavia. He was of the Norwegian royal family as well as of the Swedish and the Danish. The Scanian Yearbook writes that he was "of a nobler descent than any that time living king because of the ancient blood of his family and its royal origin both on the sword and the spinning side".

However - as mentioned above - in 1387 he suddenly fell ill and died, just 17 years old, at Falsterbo Castle in Scania. He did not get any children.

However, in the year 1402 - 15 years after his death - a man from Bohemia claimed to be the still living Oluf. However, the man confessed that he had lied when it turned out that he could not speak any Nordic languages. The fake Oluf was then taken to Lund, where he was sentenced to be burned on the stake. The letters he had written to the queen were hung around his neck and he was given a false crown on his head, after which he suffered death in the flames.

Valdemar Atterdag was the son of the last of the Valdemars, Christoffer 2, but he nevertheless represents a new beginning, a new dynasty. He was the king, who returned. He collected the sad remains of a Danish kingdom and rebuilt Denmark. Many new things came about during his reign. It is in his time that we hear for the first time that the people are made up of different estates "Knights and squires, ladies and maidens, merchants, guests, peasants and nobles" and in his reconstructed kingdom the difference between the estates of the royal office, called kongelev, and estades of the royal family, called patrinomium, disappeared.
Valdemar's grandson Oluf 2. was of both the Norwegian royal family and the Swedish royal family. He had the potential to unite the three Nordic kingdoms, but unfortunately he died early.
On Valdemar's death in 1375, Oluf was elected king of Denmark with his parents, King Håkon of Norway and Margrete, Valdemar's youngest daughter, as guardians. On King Håkon's death in 1380, Margrete also became Oluf's guardian in Norway and at the same time she was named "Full ruler and husband and guardian of the whole of Denmark". Shortly afterwards she received similar titles in Norway and in 1388 also in Sweden. We remember her as Margrete 1.
In 1396 she adopted her late sister's grandson, Bugislav, and made him king of the three Nordic countries under the name Erik of Pomerania with herself as guardian, while he was a minor. To the detriment of the Nordic unity, first the Swedish Council and then the Danish renounced loyality and allegiance to king Erik in 1439 and he retreated to Gotland and later to Pomerania.
Then Christoffer 3. of Bavaria became king of the union in 1440. He was the son of Eric of Pomerania's sister, Katarina, and thus great-great-grandson of Valdemar Atterdag. He was a flexible politician who made the councils of the three Nordic countries to work together, but unfortunately he died childless after only eight years.

Oluf was just 10 years old when he, on 29 June 1381 - on Sct. Olav's Day - was hailed in the Nidaros Cathedral in Trondheim as Norway's king. But in Denmark he was never crowned in a cathedral by the archbishop, as other young royal sons had been since the time of Valdemar the Great.

Valdemar Atterdag died at Gurre Castle west of Helsingør on 24 October 1375 surrounded by quite a few members of the royal council.

Only a few years ago, the country had survived the total disintegration under Christopher 2. and in the kingless period. It was alone King Valdemar's merit that Denmark still existed as an independent kingdom. And now he had died without leaving an heir to the throne! Members of the kingdoms council confided to emissaries from the Hanseatic Cities, who happened to be present, as negotiations were planned about the Scanian Castles, that they now feared unrest in the kingdom. 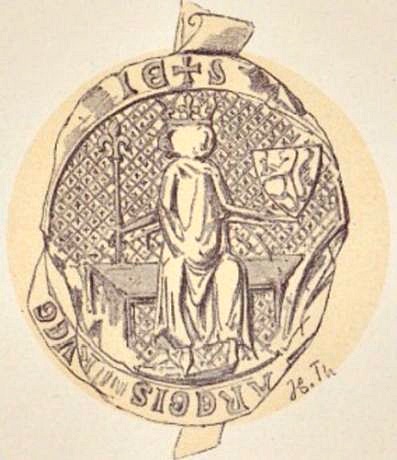 Håkon 6's seal dated to 1358–76. He sits on the throne with the royal orb and a coat of arms, which shows the Norwegian lion. The text says something like "igillum haconis dei graciA REGIS NORRVEGie et swecIE", which must mean "Håkon's seal by the grace of God king of Norway and Sweden". Drawing by Hakon Thorsen (dead before 1924) - Chr. Brinchmann: "Norske Konge-sigiller og andre Fyrste-sigiller fra Middelalderen" (1924) Wikipedia.

Denmark was an electoral kingdom, but a successor to the throne was usually chosen from within the royal family. Therefore, there were basically no other options than the sons of Valdemar's two daughters. One was the ten-year-old junker Albreckt of Mecklenburg, who was the son of Duke Henrik of Mecklenburg and Valdemar's eldest daughter, Ingeborg. The other was the four-year-old Prince Oluf of Norway, who was the son of King Håkon and Valdemar's youngest daughter, Margrete.

Valdemar himself had apparently been inclined to prefer junker Albreckt. In any case, in the peace treaty between Mecklenburg and Denmark in 1371, he had made the promise to the old duke Albreckt that his grandson, Junker Albreckt, should be king in Denmark: "that if We abdicate or die without a male heir - then after Our death, no one shall have the kingdom of Denmark and hold it as king with all royal rights, except Duke Henrik's son with Our eldest daughter Ingeborg".

It was something contrary to what Henning Podebusk and the kingdoms council had promised the Hanseatic League at the peace of Stralsund. Namely that the cities should have the right to approve a future candidate for the Danish throne. 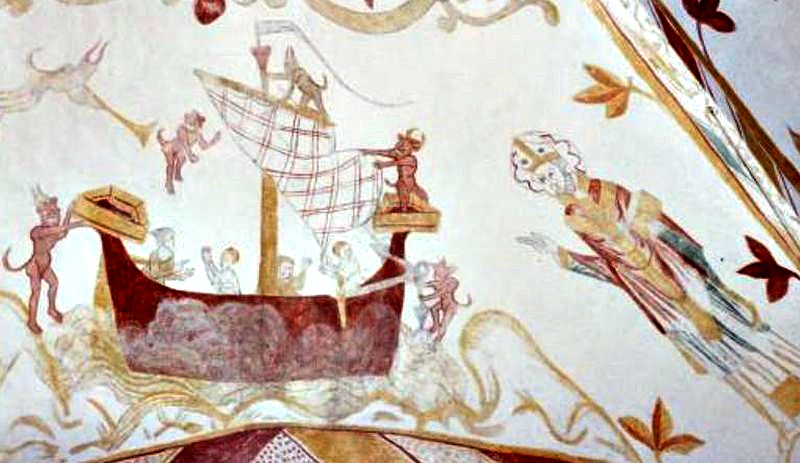 Mural showing a ship having problems in a storm in Bregninge Church from the end of the 1300's. The devils of the storm are tearing the sail and trying to tear apart the stern deck. A devil tries to tear the anchor overboard and another produces the roar of the storm. But the patron saint of seafarers, St. Nikolaus rushes to help. Photo kalkmalerier.dk