The Danish Politicians are Preparing for Greenland's Breakaway

Greenland has been a natural part of the Danish Kingdom since the Middle Ages. Nevertheless, the Danish politicians have succeeded in portraying the Greenlandic Inuits as an indigenous people, who have unjustly suffered under Danish imperialism. 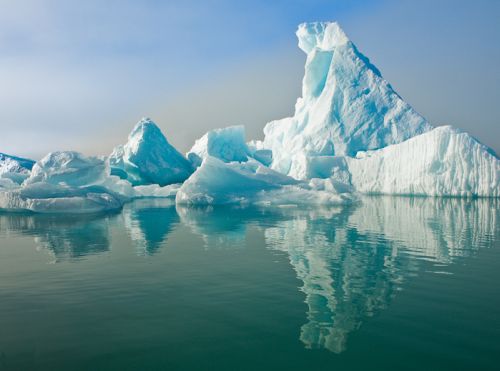 Icebergs off the coast of Greenland.

Without being forced by military defeats, epidemics or other external factors, the politicians are in full swing preparing for Greenland's brakeaway from the Danish Empire.

A Greenlandic representative has, according to a US ambassador report to Washington, jokingly told the ambassador that "Greenland is only an oil discovery from achieving economic and political independence."

The ambitious Greenlandic politicians dream that the scattered and small population can maintain a truly independent state with its own foreign policy, defense and education system. This is clearly unrealistic and will only result in Greenland in practice being taken over by the United States.

On 21 June 2004, a self-government commission was set up on the initiative of Hans Enoksen, chairman of the national government, and Anders Fogh Rasmussen, Prime Minister, with this terms of reference: " - to ensure the greatest possible degree of equality between Greenland and Denmark and to increase the Greenlandic people's self-determination to the greatest possible extent, within the framework of the existing Commonwealth".

The Danish politicians have given the green light for Greenland to breakaway at any time they please. The ambitious Greenlandic politicians can leave the Commonwealth the day they have found enough oil and minerals to think they can fend for themselves, and then alone enjoy the benefits of selling their resources.

Left: Former Brazilian President da Silva declared that the resources of the Amazon should benefit the whole of Brazil and not only the few Indians who live there.
Right: Copper ore in J.C Christensen Land in North Greenland.

Have you ever heard that the Swedish or Finnish government should have plans to give the Sami people in their northern districts full independence and leave them the right to the geological resources there forever?

It has not so much as touched the consciousness of Americans to leave Alaska to the alcoholic Indians and Eskimos who have a home there. If a single state threatens secession, they will probably deploy the military, as they did when the Southern states wanted secession in 1860.

The Brazilian President da Silva declared without delay that the resources of Amazoma and the rainforest must be an asset for the whole of Brazil and not only for the Indian tribes who live there.

Nor could Cananda dream of giving it all away. When Canadian Prime Minister Stephen Harper ended a "Truth and Reconciliation Commission" and on behalf of the state gave an apology to the native population of the country, it was with the words: "It will be a first step towards the creation of - a strong Canada for all of us."

Only Danish politicians can come up with something like the Self-Government Act. They have their heads full of noble thoughts about human rights, democracy, tolerance and respect for other races and religions - but the prosperity and future of their own people seem to mean very little to them. They seem most interested in making a good impression on their foreign political colleagues.

But the work of the Self-Government Commission culminated in "Act on the Greenland Self-Government", which was signed by Her Majesty the Queen on June 12, 2009. This Act provides that:

"P 21. The decision on Greenland's independence is made by the Greenlandic people."

"P 5. The state provides the Greenland Home Rule Government with an annual subsidy of DKK 3,439.6 million. DKK, cf., however, section 8, subsection 1. The amount is stated in the 2009 price and salary level."

The law does not match the original terms of reference because:

- It clearly points beyond "the existing Commonwealth", as the law in practice allows Greenland alone to decide on full independence.

- In practice, it is not a question of "ensuring the greatest possible degree of equality" , as future revenues from raw material extraction only accrue to Greenland's home rule. Revenue from raw materials extracted in Denmark, for example from oil in the North Sea, on the other hand, goes to the entire Commonwealth's expenditure on defense, foreign policy, support to Greenland etc.

- Nor is it a question of "ensuring the greatest possible degree of equality" , because all future elected parliaments are obliged to provide financial support of a certain amount to Greenland; while Greenland is not subject to any corresponding consideration of any kind indefinitely. A law that gives Greenland all the benefits and Denmark all the duties and expenses can generally not be said to ensure equality. 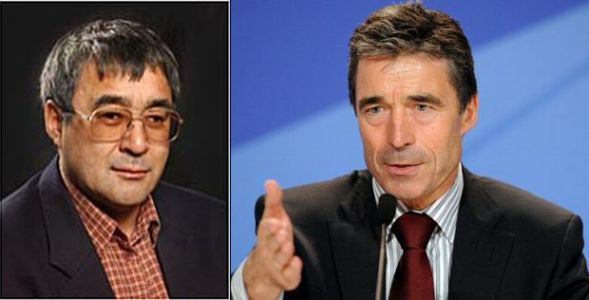 Left: Hans Enoksen, Greenland's chairman of the Greenland self-government board 2002-2009.
Right: Anders Fogh Rasmussen, Prime Minister of Denmark 2001-2009. Four months after the adoption of the Self-Government Act in 2009, he was appointed Secretary General of NATO for the period 2000-2014. He later moved permanently to Washington, where he ran a consulting firm, "Rasmussen Global". His son, Henrik Fogh Rasmussen, obtained American citizenship and entered American politics.

There are three reasons why the terms of reference have not been fulfilled.

1. From the very beginning, Hans Enoksen, chairman of the National Government of Greenland and especialy Anders Fogh Rasmussen, Prime Minister, organized the negotiations in such a way that they were given the character of two nations negotiating with each other.

2. The Greenlandic side they had generally their eyes firmly set on preparing for Greenland's independence - thus understanding that the self-government for a large part of the Greenlandic legation members alone has had to serve the overall purpose of being a springboard to real independence.

3. But the most decisive reason why the law became as it did, must be the Danish politicians' unwillingness to preserve the Commonwealth and their lack of political will to support Denmark and Danish interests. They have been too preoccupied with making everything look good and humane from a foreign point of view. 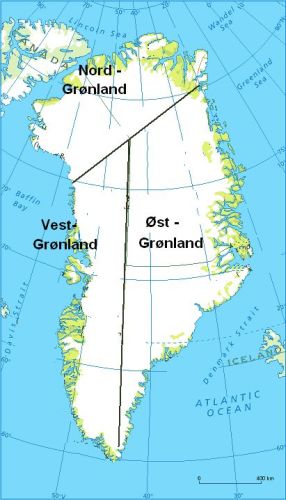 Moreover, why should an independent Inuit state have North and East Greenland with all its resources donated on top of the hat? Inuit's homeland is West Greenland and the extremely few indigenous inhabitants living in East Greenland have a completely different culture. East and North Greenland have primarily been explored by Danish polar explorers.

In reality, Denmark's expenditure on Greenland is much larger than the direct financial support. Part of the expenses, for example, go over the defense budget. Helicopters, four inspection ships, three inspection cutters, which are built solely as they are, to be able to operate in icy waters, cost about 1.5 billion a year in operation and depreciation. In addition, there are expenses for cash benefits and other support for Inuits who choose to live in Denmark.

As early as 1976, the then Social-Democrat Prime Minister Anker Jørgensen set up the possibility of Greenlandic independence: "There is nothing to play dice about" , he told Kalaallit Nunaata Radioa - Greenland Radio - when the Greenlandic left-wing party Siumut demanded that Greenland gained ownership of the underground. If the Greenlanders wanted ownership of the underground, they would have to breakaway from Denmark, Anker Jørgensen said.

Since then, the Danish politicians, all of them except the Danish People's Party, have given it all away.

The Self-Government Act is, in fact, in practice an approval that Greenland can leave the Commonwealth on the very day they have found enough oil and minerals to think they can manage on their own, and then keep the resources to themselves.

The Danish politicians seem to imagine that the Inuits are the original Greenlanders, who have lived in the country "always" until the imperialist Danes came and disturbed their originally idyllic life in harmonious connection with nature. Therefore, Danes should feel guilty and give the ambitious Greenlandic politicians everything they ask for.

But in reality, the Inuits are not Greenland's indigenous peoples any more than other historical hunter-gatherers and Scandinavians are.

Besides the Norsemen, at least five different people have immigrated to Greenland over time. They were probably all of different ethnic types and spoke different languages. The Inuits, who today live in Greenland, arrived a few hundred years later than the Norsemen. They immigrated from the north, and the Norsemen came from the south.

Around 2,500 - 1,800 BC. the first immigration to Greenland took place. They came from Canada and followed the musk oxen across the ice and settled in Peary Land high in the north. They are called the "Independence I" people. No one knows how they looked like and what language they spoke. Greenlandic sources often call them "Eskimos", but we only know their habitats and flint tools, they could have been red-haired or dark-haired, we do not know.

Left: Norsemen and Inuits around the year 1100 AD. - The Norsemen arrived as early as 985 AD.
Right: Independence II mask in ivory.

Around 1400 - 700 BC. came a hunter people, called the "Saqqaq" culture, they settled along the coast of West Greenland from Upernavik to Godth&#229b. At the same time, another people belonging to the "Independence II" culture came to North Greenland. Based on a gen-analysis of a few hairs, the University of Copenhagen has recreated a Saqqaq man, who does not look particularly Eskimoic.

However, both peoples succumbed to a cold spell that began in 400 BC. and lasted until about 200 AD.

The "Dorset" people arrived around or just after year 0 and settled in West Greenland. However, the archaeological traces of them disappear 600 to 700 years ago. They were driven out and annihilated by the Inuits, who came from Baffin Land to Greenland around 1200 AD. via the Thule area, from where they slowly spread south.

In 1954, Master of science Jørgen Meldgaard participated in an international archaeological expedition, which aimed to explore the remains of Dorset settlements on the Melville Peninsula and the Baffin Islands. They found 208 Dorset houses on the Melville Peninsula and 48 on Jens Munk Island. He wrote an article about the results of the expedition.

There are still Inuit legends about them. The Inuit myths tell that the first inhabitants were "giants", that is, people who were taller and stronger than the Inuits, yet easy to intimidate and chase away. It is said that "they were very skilled walrus and seal hunters. Wearing long cloaks with large collars they stood waiting for the seals to come up to draw air by their breathing holes. When the prisoners came home with walrus, they were very tired, but as soon as the women appeared outside their houses, they gained new strength," for, as the legend says, "they loved their women and children very much.

The Inuits from Igluik told the expedition that Tunits were good reindeer hunters, who could kill the reindeer on foot only armed with spears. They did not know the bow and arrow. In the winter, they caught seals at the breathing holes in the ice. Another important prey was the walrus; and here the legendary strength of the Tunits was of great help, especially in the transport home, for they had no dogs, but only a short sleigh, which they pulled themselves.

"The island of Ugilt south of Alarnek was Tunit's last living place," reported old Arnanguanq to the expedition participants. "Often they had to go very far on the ice to get the walruses, and therefore they were tired, despite their strength, when approaching Uglit. But then the women just needed to show up outside the houses to bring the power back to the hunters, for Tunit was very happy for their women. - Tunit was chased away by our ancestors, often after battle. Our ancestors liked to fight a lot, just like white men do today."

Dorset self-portraits carved in bone - They do not look very Eskimo-like, the first three look more like Europeans.

We note that the Inuits are not an unconditionally peaceful people, when they felt they had superior force. They did not refrain from a genocide of the Dorset people.

The first Scandinavians settled in southwest Greenland in 985 AD.

Some hundred years later, around 1200 AD, the "Inuit" immigrated to northern Greenland and spread slowly south along the west coast of Greenland.

3. The Norsemen in Greenland