Timeline from Neolitic to historical time.

The oldest part of the Iron Age is commonly called the Celtic Iron Age because it took place at the same time as the Celts and the Celtic culture dominated in central Europe. Some prefer to call the period the pre-Roman Iron Age, believing that the name "Celtic Iron Age" may cause incorrect associations toward that Denmark was Celtic or Celtic culture prevailed during this period. 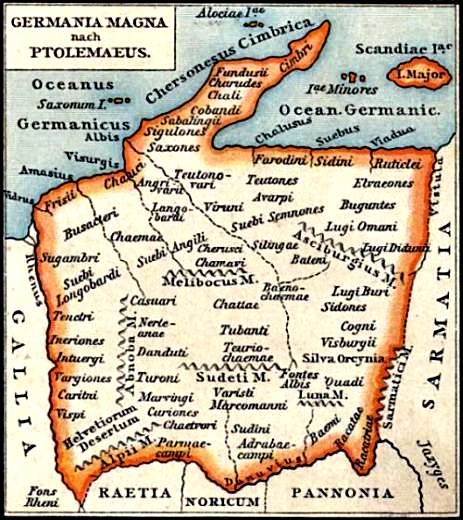 Section of the Ptolemy World Map. It is based on his book Geographia, which he wrote about 150 AD. The geographical name of Jutland was Chersonesus Cimbrica, the Cimbrian peninsula, and it was called so precisely because the Cimbri lived there.
Many historians have had different ideas. The Swede Oluf Rudbeck placed Cimbri in the city of Cimbrishamn in Scania. The German Mullenhoff took it for granted that the Cimbri came from northern Germany. An Englishman, James Rankin, believed that Cimbri was one of Israel's lost tribes.
But the most important of the ancient authors, Ptolemy, Pompey Mela, Pliny the Elder and partly Strabo relate that the Cimbri lived on a peninsula in the Northern Ocean, and east of this peninsula is a large bay with countless islands. It can hardly be misunderstood.

Nothing indicates that there have been Celts in Denmark or the Celtic culture had dominated. Southern Scandinavia was a Germanic heartland, and this is confirmed by numerous finds. However, we must assume that it was inspiration from the Celtic La Tene culture, which made the Scandinavian people capable of extracting iron from bog iron ore.

Bog iron ore is found in wet areas, especially along rivers and lakes, where the ferrous groundwater comes to the surface and becomes oxidized. Bog iron ore precipitates to form a more or less compact layer 15-30 cm under the turf. By far the largest deposits of Danish bog iron ore are found on the sandy lime free West Jutland heaths south and west of Viborg and down to the border, that is in the part of the country that was free of ice during the last ice age. There is only insignificant bog iron ore deposits in Eastern and Northern Jylland, Fyn, Sjælland and other islands, because the clay soil of the moraine landscape is too compact to allow sufficient quantities of groundwater to seep through and dissolve sufficient iron.

Iron production in ancient times has traditionally been localized in Jutland, and it is tempting to believe that the Iron Age began in Jutland.

Left: A piece of bog iron ore that Vagn F. Buchwald from Danish Geological Society has found in his garden in Skanderborg.
Right: Iron Age village at Hvolris near Viborg in December 2010. A group history interested inhabited the houses in December. Photo: Niels-Christian Jï¿½nsson.

Bronze Age's end and start of the Celtic Iron Age is traditionally considered to have taken place about 500 BC, and the period lasted until around the birth of Christ. Some think, however, that the Iron Age started two hundred years later. 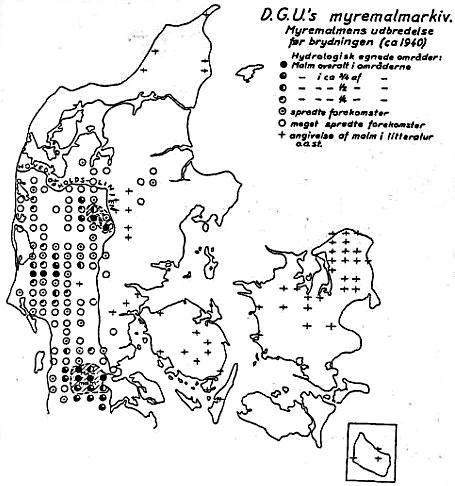 The occurrence of bog iron ore in Denmark according to Danmarks Geologiske Undersøgelser.

Bronze was still used throughout the period, but now mainly for decorative objects, such as neck rings, wagon fittings, parts of harness for horses and the like. This was designed in the same style as known from the Bronze Age.

A few hundred years before the transition from Bronze to Iron Age occurred a climate change so that the Bronze Age's relatively warm and dry subboreal climate was replaced by a colder and wetter subatlantic climate. The Iron Age's walled villages were larger and probably more populous than the Bronze Age villages. Due to constant increase of population density the Iron Age landscape became more and more intensively utilized.

The Bronze Age slipped quietly into the Iron Age, and it does not seem that there was any abrupt changes in society by the introduction of the new material. The late Bronze Age funeral custom of cremation and depositing the ashes in urns was maintained, and also the custom to sacrifice to the usual gods in the bogs continued, as it had been done for millennia; all of which indicate a cultural continuity from the Bronze to the Iron Age.

At the end of the Celtic Iron Age, the Germanic tribes were first mentioned in written history, particularly because of the Cimbri's and Teuton's invasion of the Roman Empire that the Romans narrowly rejected. This expedition has often been described as a forewarning of the turbulent Migration Age, that should come some hundreds years later.

Denmark's geography in the Iron Age was very similar to its modern geography except that Jyllands coastline facing the North Sea, in all probability was located further west than today. Before the birth of Christ, the island of Sild was part of the marshland along the west coast of Jutland. Archaeological excavations have shown that it was already inhabited in the Neolithic. On the island have been found burial urns from the Bronze Age and small-mound graves from the Celtic Iron Age.

About 15,000 years ago - 13,000 BC - the ice sheet, that covered almost all of Scandinavia, slowly began to melt away. The reindeer walked to the north followed by the reindeer hunters. It is decided that the Ice Age in Denmark finally ended about 9,700 years ago. The green line represents the temperature on the surface of the ice. Dryas is the Latin name for the Arctic plant mountain avens, which is very hardy and the first to grow up after the ice has melted.
The temperature rose, and Denmark became completely covered by an primeval forest in which the Maglemose people hunted and fished. They were followed by the hunters of the Kongemose Culture, which with great certainty were the descendants of the Maglemose people. The following Ertebølle culture hunted and fished mostly along the coasts. Only in the Peasant Stone Age the people began to keep animals and cultivate the soil. About 500 BC the Bronze Age was replaced by the Iron Age's three periods. The Viking Age began with the attack on the monastery St. Cuthbert on the island of Lindisfarne in England in 793 AD and ended with the killing of Canute the Holy in 1086 AD in Odense. The Middle Ages ended in 1536 with the Civil War, the Count Feud, and the Lutheran Reformation.
The Minoan warm period occurred around the middle of the Bronze Age and lasted some hundred years, it was followed by the Celtic Iron Age cold period that lasted until the start of the Roman Warm Period, which occurred a few hundred years before birth of Christ.
In 60% of Denmark's history, the main occupations have been hunting and fishing. In 75% of the time has been a kind of Stone Age.

The west coast of northern Jylland is constantly eroded by the sea, and it has certainly stretched farther west than today. Limfjorden was open to the North Sea, as the opening first sanded up in the Viking Age around 1100 AD. Some islands, such as Helgoland, Vresen, Hven and Saltholm were larger in the past than they are now. Lammefjorden, Saltbæk Vig, Lumby Strand near Odense and other, now drained areas, were shallow estuaries in the Iron Age. 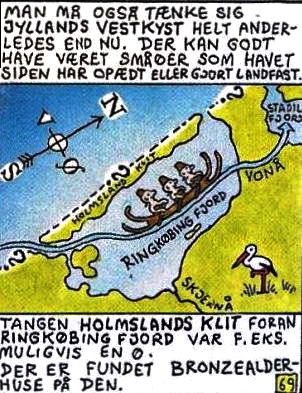 Sailing in sheltered waters illustrated by Claus Deluran in Danmarks-Historie for Folket.

Ancient sources speak of the Cimbrian Promontory; we must assume that it has been Hanstholm, as it is the only nature formation that can create reminiscent of a mountain along this coast.

Sailing along the west coast of Jutland in open sea has always been dangerous, and it is hard to imagine that flimsy Iron Age boats or Roman galleys could navigate these waters, as Emperor Augustus reported.