3. Hitler was an Opportunist

The British historian A. J. P. Taylor wrote in "The Origins of the Second World War" that Hitler was an opportunist, and he had no plan to begin a great war - the war was caused by political and diplomatic mistakes and blunders on both sides. 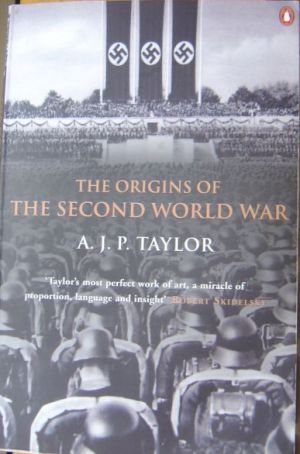 Taylor wrote that both sides had responsibility for the diplomatic failures and blunders that led to the war.

Taylor wrote that in his view, almost all politicians are opportunists. They take a step, see what happens and evaluates the possibilities that open up. Hitler was no exception. He had no long-term plan for a major war.

"It is true, that he is in "Mein Kampf" had visions of Lebensraum in the East. He has undoubtedly been most prone to seek expansion in Eastern Europe, but however without an actual plan. But then the war that he started against the Western powers in 1939, must also be a mistake."

Moreover, many statements show that the Germans themselves believed that they first could be ready for war in 1943. It also suggests that war, which started in 1939, was a mistake.

One of Hitler's Generals, Keitel, wrote in his diary about the German-Italian military talks in April 1939, which were initiated after Italian pressure. It turned out that the Italians insisted on to tell that they could only be ready for war earliest in 1942. The German representatives agreed with them. (Taylor s. 14)

You can not say about a nation that is ready for war, that this proves that they also want a war. It is the very purpose of any nation's defense policy to be ready for a possible war. 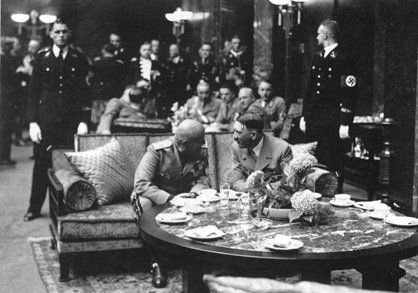 Hitler and Mussolini in eager conversation.

"Everyone, particularly the British and the French, assumed that there was plenty of time. Germany was still virtually disarmed when Hitler came to power. She had no tanks, no airplanes, no heavy guns and no trained reservists. It would take her ten years, according to normal experience, to become a formidable military Power. This calculation was not altogether wrong. Hitler and Mussolini shared it. In their conversations, they always assumed that 1943 would be the year of destiny." (Taylor s. 104)

"In 1938-39, the last peacetime years, Germany spent on armaments about 15 percent of her gross national product. The British proportion was almost exactly the same. German expenditure on armaments was actually cut down after Munich and remained on this lower level, so that British production of airplanes, for example, was way ahead of Germany by 1940. When the war broke out in 1939, Germany had 1,450 modern fighter planes and 800 bombers; Great Britain and France had 950 fighters and 1,300 bombers. The German had 3,500 tanks; Great Britain and France had 3,850." (Taylor s.19).

These numbers do not suggest that Germany had planned and prepared a great war that they started in 1939. 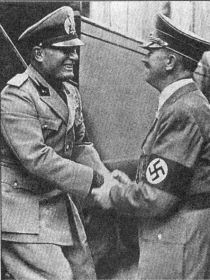 Hitler and Mussolini meet at Brenner.

Taylor wrote: "Hitler bears the greatest responsibility for acts of immeasurable evil: for the concentration camps; and worst of all for the extermination of peoples during the second World war."

"His foreign policy was a different matter. He aimed to make Germany the dominant Power in Europe and maybe, more remotely in the World. Other Powers have pursued similar aims, and still do (1961). Other Powers treat smaller countries as their satellites. Other Powers seek to defend their vital interests by force of arms. In international affairs, there was nothing wrong with Hitler except that he was a German." (Taylor s. 27)

"There was a curious, though only superficial contradiction in Hitler between aims and methods. His aim was change, the overthrow of the existing European order; his method was patience. Despite his bluster and violent talk, he was a master in the game of waiting. He never made a frontal attack on a prepared position - At least never until his judgment had been corrupted by easy victories. Like Joshua before the walls of Jericho, he preferred to wait until the forces opposing him had been sapped by their own confusion and themselves forced success upon him. He had already applied this method to gain power in Germany. He did not "seize" the power. He waited for it to be thrust upon him by the men, who had previously tried to keep him out. In January 1933 Papen and Hindenburg were imploring him to become Chancellor, and he graciously consented. So it was to be in foreign affairs." 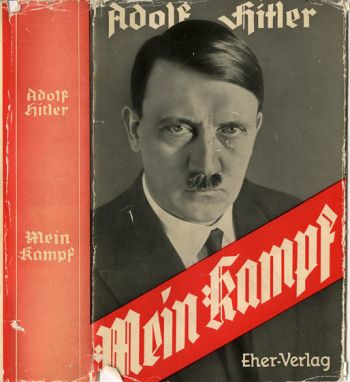 "Hitler did not make demands. He announced that he was dissatisfied, and then he waited for the concessions to pour into his lap; merely holding his hand out for more. Hitler did not know any foreign countries at first hand. He rarely listened to his foreign minister and never read the reports of his ambassadors. He judged foreign statesmen by intuition. He was convinced that he had taken the measure of all bourgeois politicians, German and foreign alike and that their nerves would crumble before he did. This conviction was near enough to the truth to bring Europe within sight of disaster." (Taylor s. 109)

"Whatever his long-term plans (and it is doubtful whether he had any), the mainspring of his immediate policy had been "The destruction of Versailles". This was the theme of "Mein Kampf" and of every speech he made on foreign affairs. It was a policy, which won the unanimous support of the German people. It had also the great advantage that, in practical terms, it virtually wrote itself: After each success, Hitler had only to look into the peace treaty, and there he found another clause ripe for destruction. He had assumed that the process would take many years and that he would encounter great difficulties. Triumph over these would provide a running stock of mounting prestige. Actually, the destruction of Versailles and Locarno alike took only three years and it raised so few alarms that we now wonder, why Hitler did not do it more quickly." (Taylor s. 142)