2. The Versailles and Münich Settlement

The Entente won victory in the first World War, thanks to the Americans arrival on the battlefield with fresh troops. Therefore the Americans could make a conclusive impact on the peace negotiations in Versailles.

The armistice was accepted on the basis of Wilson's 14 points, but in the later peace talks in Versailles, Wilson's points were largely ignored in favor of tougher conditions for Germany, which included the payment of huge war reparations.

Versailles was not a negotiation between the two former warring parties. Germany and Austria-Hungary did not have a seat at the negotiating table. It was the victorious powers that negotiated with each other what conditions they should demand of the Central Powers. Conditions that were pushed down over the heads of the losers with a hunger blockade.

The later famous economist John Maynard Keynes left the negotiations in protest and traveled home, writing "The Economic Consequences of Peace". The message of the book was that Europe would not be able to prosper without a fair, efficient and integrated economic system, which was not possible under the economic terms of the Treaty. Moreover, he believed that the Allies in the peace treaty had failed the promises they made in the ceasefire agreement in terms of compensation, territorial adjustments and uniformity in economic conditions. He predicted that the Treaty of Versailles would promote a desire for revenge among the Germans and thus create a new war. The book became a best-seller and made him world famous.

Taylor wrotes: "The peace of Versailles lacked moral validity from the start."

The Germans were left with a distinct feeling of having been cheated. 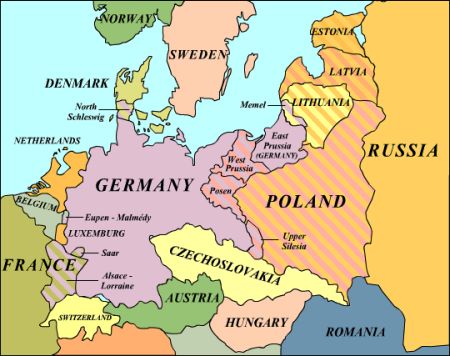 Map of Europe as result of the Versailles Treaty.

However, President Woodrow Wilson did not get the peace treaty approved by the U.S. Senate. The Americans withdraw to their traditional isolationist policy and took thereafter no part in European politics.

In terms of population and industry, Germany was slightly larger than France and England combined.

Russia, another European power, was sidelined by the communist revolution. They did not participate in European policy. In Italy, Mussolini came to power. He was expelled from the good company due to the Italian warfare in Ethiopia, and after some hesitation he chose to join Germany and Hitler.

England had problems in the Far East, where the empire was threatened by Japan. France was on the brink of civil war in the struggle between the People's Front and Right Wing. Spain was in open civil war. 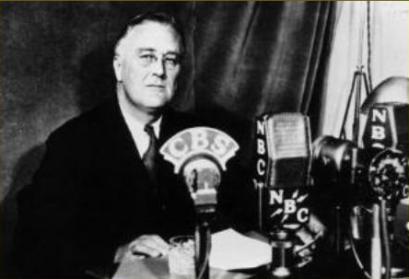 France and England became the only powers to enforce the Treaty of Versailles. They were willing to give Germany concessions in the harsh conditions imposed on Germany by the Treaty of Versailles in order to reduce tensions and avoid a new war. But they made their concessions too late - probably out of fear of the voters' verdict. Compared to the democratic German governments in the first half of the interwar period, they did not give an inch. Only when Hitler came to power did they realize the seriousness of the situation and become willing to compromise, for example in Münich.

Taylor writes that the Münich Settlement was a moral victory for the people's self-determination, more than it was a response to Hitler's demands. But Hitler chose to perceive it as an expression of fear and could not resist the temptation to boast of his strength.

It is often argued that the Western powers should have overthrown Hitler's regime, while it was in its infancy. But as Taylor writes: "can any sane man suppose, for instance, that other countries could have intervened by armed force in 1933 to overthrow Hitler, when he had come to power by constitutional means and was apparently supported by a large majority of the German people." (Taylor s. 25)

When the Czechoslovakian crisis was developing, the American president Roosevelt told his press conference on the 9. of September 1938: "that it was 100 % incorrect to associate the United States with France and Great Britain in a front of resistance to Hitler." (Taylor s. 215)

On the height of the crisis, the president declared: "The government of United States - will assume no obligations in the conducts of the present negotiations." (Taylor s. 237)

Language Distribution in Czechoslovakia in 1911 when it still belonged to Austria-Hungary. Red stands for German, blue stands for Czech, gray is for Hungarian and yellow stands for Italian.

He writes about the British positions on the crisis of Czechoslovakia:

"With the British on the other hand, morality counted for a great deal. The British statesmen used practical arguments: the danger from air attack; the backwardness of their rearmament; the impossibility, even if adequately armed, of helping Czechoslovakia. But these arguments were used to reinforce morality, not to silence it. British policy over Czechoslovakia originated in the belief that Germany had a moral right to the Sudeten Germany Territory; on grounds of national principle; and it drew the further corollary that this victory for self-determination would provide a more stable, more permanent peace in Europe. The British government was not driven to acknowledge the dismemberment of Czechoslovakia solely from fear of war. They deliberately set out to impose this cession of territory on the Czechs, before the threat of war raised its head. The settlement at Münich was a triumph for British policy, which had worked precisely to this end; not a triumph for Hitler, who had started with no such clear intention." 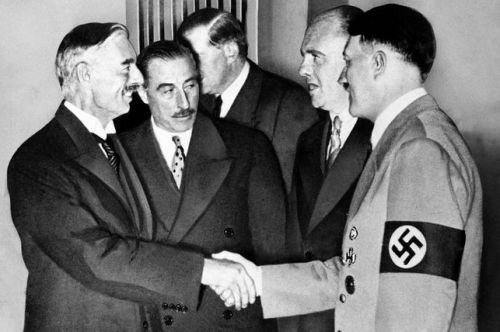 "Nor it was merely a triumph for selfish and cynical British statesmen, indifferent for the fate of far-off peoples or calculating that Hitler might be lured into a war against Soviet Russia. It was a triumph for all that was best and most enlightened in British life." (Taylor s. 234-235)

However, Neville Chamberlain and the overwhelming majority of British politicians were contradicted by a small but resolute group, led by Winston Churchill and Lloyd George. They were supporters of real policy and wanted an alliance with their enemy's enemy.

The opposition wanted to create such a coalition of smaller powers that could hold the great power in check. As it had always been the case in European history.

The Western powers, led by Chamberlain and Daladier, declined to ally with the Soviet Union, presumably also on moral reasons. Among the voters, there was a significant opposition to the socialist idea and the Soviet Union. Further, it was known that Stalin committed countless atrocities against his own people. Therefore, it was more politically acceptable to make a settlement with his enemy, Adolf Hitler.

They also rejected to press their allies in the east to accept cooperation with the Russians. On their part the young nations in Eastern Europe, Czechoslovakia, Poland and Romania also seemed to prefer Hitler rather than Stalin.

On the 23. of September 1938, Hitler, Mussolini, Chamberlain and Daladier met in Münich and agreed, that the German army would pass the Czechoslovakian border on the 1. October 1938 and take the areas, that had German majority, in their possession.

In addition, a joint peace declaration was signed by Germany and Britain. That was the document, which Chamberlain held up when he stepped out of the airplane at his return from Münich.

In contrast to the Western Powers' statesmen, the Soviet Union took Hitler's talk seriously. They believed that it was his intention to destroy socialism not only in Germany but also in Russia, and they feared that most Western statesmen would applaud this. They were convinced that Hitler's intention was to take possession of Ukraine, in accordance with his vision of "lebensraum in East", which he had written about in "Mein Kampf". They had a genuine interest in cooperating with the Western Powers. 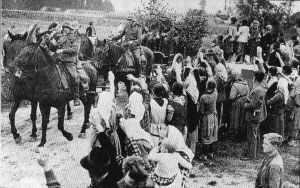 German troops move into the Sudetenland.

On 12. of May Litvinov, the foreign policy secretary raised the Czech issue with Bonnet (French foreign minister) during a meeting in the League of Nations in Geneva.

Bonnet asked how the Soviet Union could come to help of Czechoslovakia in light of the Polish and Romanian refusals to allow the passage of Soviet troops. Litvinov replied that France had to obtain permission for this since these nations were France's allies. - Bonnet only sighed and "this", according to Litvinov "ended the conversation." (Taylor s. 205)

Hitler on his part believed that the Western powers had concluded the Settlement in Münich because of fear. He had met Chamberlain both in Berchtesgaden and Bad Godesberg, where he did not agree to the German wishes regarding Czechoslovakia. He had made a speech in Berlin on 26. of September, where he expressed the German determination. Three days later the western powers accepted in Münich. 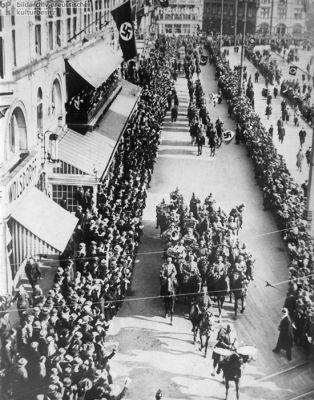 Dusseldorf welcomes the German troops at the occupation of Rhineland, on 10. March 1936.

Thus it had been every time Germany rebelled against one of the paragraphs in the Versailles Treaty, in the beginning, protests but later tacit acceptance.

When Germany introduced compulsory military service, they also confined themselves to send a protest note.

"Anschluss" with Austria proceeded in the same way. In the beginning, the Western powers said no, no. But after they were presented with a fact, they accepted.

"Hitler drew the lesson that threats were his most potent weapon. The temptation to brag about Münich as a triumph of force was too great to be resisted. Hitler no longer expected to make gains parading his grievances against Versailles. He expected to make them by playing on British and French fears." (Taylor s. 236) 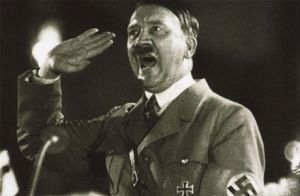 Hitler thought he had won in Münich by using threats.

The following year on 22 August 1939 Adolf Hitler made a speech for his generals, where he referred to Münich. It was a week before the invasion of Poland. He said: "The enemy did not expect my great determination. Our enemies are little worms, I saw them at Münich - Now Poland is in the situation, that I wanted. - I am only afraid that some bastards in the last minute will present me for a negotiation plan."

It was very important for Hitler to be a strong man in the eyes of his generals. He knew that they had little confidence in him.