Emergency law means that the ruler or the government in an emergency situation can take measures that are outside the limits of the law or against the direct letters of the law. It must be decided by the executive power.

For example, the Danish intelligence agency's files are a typical example of emergency law. They are a clear violation of the Danish Basic Law article 77 - "Censorship and other preventive measures shall never again be reintroduced." 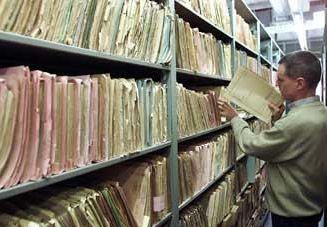 The files of intelligence agency.

The concept of emergency law is based on the truth that the overall purpose of all government really is the good of the people.

Democracy, laws and human rights are merely means that the people can use to control the executive branch and thereby ensure that it works for the real purpose, which is the best for the people.

Human rights and democracy should not be overall common values that replace the real objective, the good of the people. They are only tools in the political process. If they stand in the way of this objective, the executive power will do right to ignore them.

Emergency laws may imply that the executive power interferes in some citizens' freedoms as defined by actual laws, in order to achieve the larger goal of the good of the people and the nation.

Emergency laws can hardly be defined in a constitution or other laws, since these precisely by definition are measures that are not within the scope of the law, or they are contradicting existing laws' written letter. It takes measures for situations, which legislators were unable to predict, when the laws were made.

Rules for emergency laws or prerogative, as Locke called it, cannot be defined by international legal literature and legal experts' notes. If the situation requires that the executives cannot follow written laws, why should legal professors' papers restrict them?

After the emergency situation is over, the executive should seek approval for its actions in the parliament and ultimately with the people.

When the hero of an American action film jumps into a random private car, pulls up a police sign and says: "Police, we need this car, get out". So it is a kind of popular illustration of emergency law.

The police agent overrides some less important laws, namely such about private property and the owner's right to exercise his ownership over his car, in order to achieve a greater common good, namely the arrest and conviction of the great enemy of society, whom he pursues. 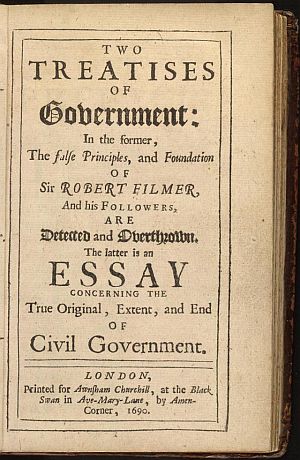 Second Treatise of Goverment by John Locke. - He published it anonymously as an argument against a Robert Filmer, who wrote the the people was one big family with the king as the father.

I do not believe that American police in real world behaves like this.

Emergency law is primarily described by John Locke in his "Second Treatise of Government '" Chapter XIV, "Of Prerogative". What Locke calls "prerogative" is a wider concept than emergency law.

In Denmark, the executive and the legislature powers have used emergency law in a number of cases. It is in the case of the internment of the communists in 1941, the conviction of the returned volunteers from the Eastern Front in 1945 as part of the general prosecution of persons, who had cooperated with the Germans, and in connection with the establishment and running of the secret files over possible enemies of the state in the post war period.

It seems likely that emergency law may play a role also in the solution of future society problems.

The philosopher John Locke was the architect of the modern Western democracies. It was his ideas about democracy, which the thirteen rebellious British colonies used in 1776 in their new Constitution for the United States. The new democracy in the distant America became a major inspiration for the following French Revolution in 1789.

Locke created the ideas of representative democracy, regular elections, separation of power, and much more.

His political masterpiece is "Second Treatise of Government". Chapter 14, "Of Prerogative", describes government decisions that are not supported by ordinary law. 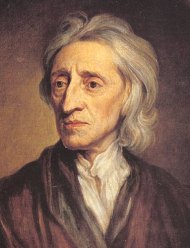 John Locke was aware of the danger that politicians could come to forget the true purpose of legislation and government and tangle up in pedantic speculation about democracy-theoretical details.

The basic purpose of laws and government are the good of the people. Locke wrote: "- judging rightly, that they did nothing herein to the prejudice of their laws, since they acted conformable to the foundation and end of all laws, the public good."

The executive power should be able to make decisions outside the framework of the law, wrote Locke. "- for the legislators not being able to foresee, and provide by laws, for all that may be useful to the community, the executor of the laws having the power in his hands, has by the common law of nature a right to make use of it for the good of the society, in many cases, where the municipal law has given no directions".

In an emergency situation it should also be possible for a government to take decisions against the letter of the law, to the best of the people. "This power to act according to discretion, for the public good, without the prescription of the law, and sometimes even against it, is that which is called prerogative".

That is, what we call emergency law.

The people have no trouble determining whether a prince's government is for the good of the people or not. 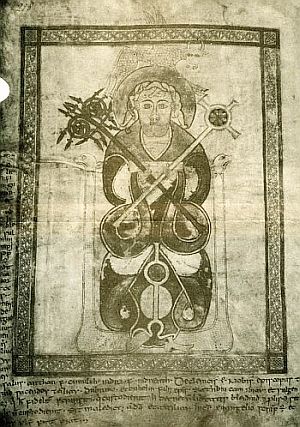 A king of Llandaf, which made up a minor part of Wales on the time of king Arthur.

After the situation has normalized and it is practicable, the legislature power must be convened and the executive power may seek approval for its actions."- till the legislative can conveniently be assembled to provide for it.." (Sec 159)

Once in ancient times, when nations were not much bigger than large families, nearly all government was prerogative. There were a few simple laws, and for the rest the king took care with his daily decisions, his prerogative. The king watched over his people as a father, and his people knew, that he would work only for their best. They shared a common destiny. If it went wrong for people, it would also go wrong for the king, and vice versa. Nobody had any ideas about democracy.

Laws and democracy have entered the world basically because of distrust of the rulers. "But when mistake or flattery prevailed with weak princes to make use of this power for private ends of their own, and not for the public good, the people were fain by express laws to get prerogative determined in those points wherein they found disadvantage from it.".

But the people will allow good princes extensive powers "- for as a good prince, who is mindful of the trust put into his hands, and careful of the good of his people, cannot have too much prerogative, that is, power to do good."

In Denmark, the executive power has used their prerogative in a number of cases, issuing emergency laws. 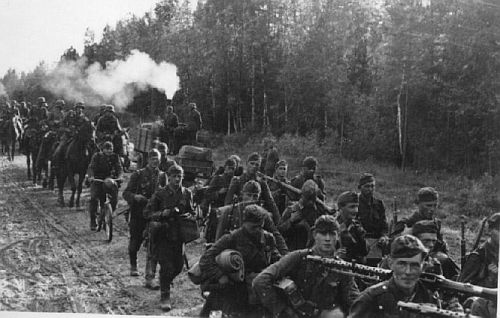 German soldiers on the march in Russia June 1941.

When the Germans opened their Barbarossa offensive against the Soviet Union on June 22 1941, requested the German military commander in Denmark 196 named Danish communists to be arrested and taken into custody, including three members of parliament.

The head of the government, Thorvald Stauning, gave the order that the German request should be fulfilled.

A total of 325 Communists were arrested by the Danish police and placed in the prison, "Vestre Fængsel", or detained in a camp at the village of Horser&#248d near the city of Helsingør.

Two months later, 20 August 1941, Parliament passed a law retroactively, which outlawed communist activities and was the legal basis for the arrest of any person, who was supposed to take part in such activities.