In August 1332 King Christoffer 2. died in an ordinary house in Saksk&#248bing on the island of Lolland. For a period of almost ten years after his death, there was no Danish king, nor any royal council and no court. The Danish government had ceased to exist, and the political vacuum was filled by a Holstenian military dictatorship.

Count Gerhard held Denmark west of the Great Belt in an iron grip. But apart from tax collection, power and control, society did not interest him much. He did not even bother to give himself a formal title. In general he ruled very little, and only when circumstances compelled him to do so, for example, in case of rebellion.

The community was kept going by the inhabitants' self-created bodies, such as congregations, village tings, merchant and artisans' guilds, monastic communities, city councils, and probably the authority of nobles, priests and bishops. Danehof was held every year, but what the assembly talked about is not known.

At the conciliation meeting in Kiel on 10 January 1332 between Christoffer 2. and the Holsten counts, Count Gerhard and Count Johan estimated that Denmark was worth 200,000 marks of silver, all inclusive, and they owned half each.

Front and back of Christoffer 2. coin. One Mark was 8 øre and one øre 3 ørtug. The ørtug was again divided into 10 or 12 pennings. Only the penning was minted, this coin is thus a penning. Hence the word penge, which means money in Danish. The money was weighed, a medieval mark was 216 gr. Originally a mark of silver and a mark of money were the same, but gradually the silver content of the coins deteriorated, albeit with many fluctuations. In the last years of Valdemar the Victorious' time, 2 marks of money was equal to 1 mark of silver. During Erik Menved's wars at the end of his reign, 10 marks of money was equal to 1 mark of silver. In the time of Christoffer 2, the coins were struck in pure copper and thus could not be calculated in mark silver. One can thus say that different kinds of money were the national currencies and mark silver was an international settlement currency. The counts' valuation of Denmark was in mark silver. 200,000 * 0.216 = 43,200 kg of pure silver - that is 43.2 ton of silver for a kingdom. Photo Samlerforum.

Only a king could provide parts of his kingdom as pawn fiefs for a loans. The pawn fiefs could be redeemed, but only by the debtor - if he had the money. However, there was no longer any king and the kingdom could also be questioned. This must have been the cause of some nervousness on the part of the counts. The historian Erik Kjersgaard thus quotes a chronicle writing about Count Gerhard: "He clearly realized that the Danes were very unsteady in their actions."

Like other claims, the pawn fiefs could be both bought and sold, and the original lenders could thereby get their money without the loan being redeemed. Therefore, the counts Gerhard and Johan divided their large pawn fiefs into smaller pawns, which they sold to mercenary commanders, rich merchants and other German nobles. 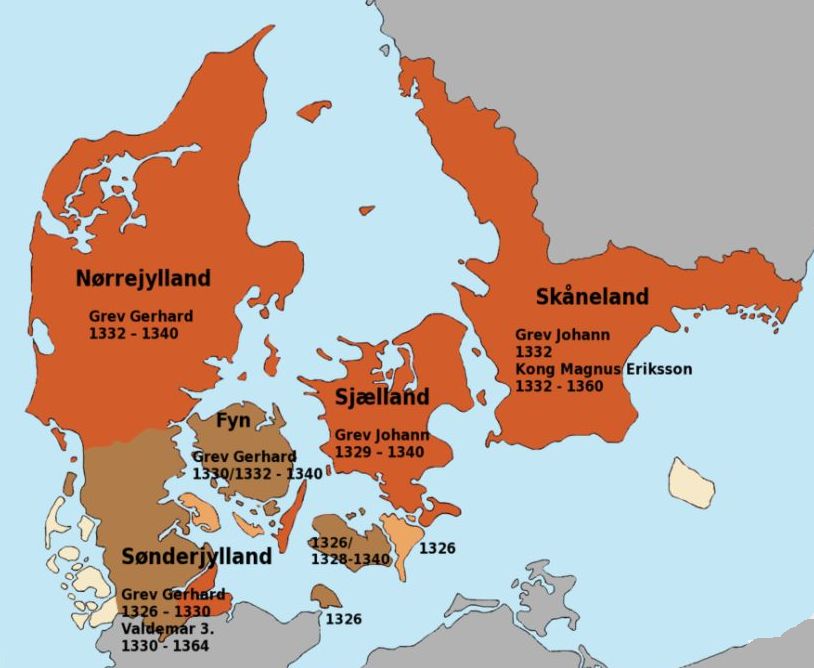 Denmark in 1332. Red-brown - Jutland, Zealand, Scania - stands for pawn fiefs, light brown - Als, Falster - stands for "ordinary" fiefs, ordinary brown stands for something in between pawn fiefs and ordinary fiefs. Estonia is not shown. It was occupied at some point after 1332 by the German Order, which had it in its possession, when Valdemar Atterdag sold the land to the Order in 1346. Photo Vesconte2 Wikipedia.

Eggert Brockdorff got Helsingborg for 600 marks of silver. Claus Limbeck paid 10,000 marks of silver for Kalø. Markvard Stove got Copenhagen, and one of his relatives got Vordingborg. In this way, dozens of other German knights were given pawn fiefs in the former Danish Kingdom for a payment. They were thus entitled to all the taxes and duties that the former Danish king had been entitled to in their area, and they zealously collected them to get their investment paid back and preferably a little more.

Jutland Chronicle says that the Holstenians effectively won power in Denmark in 1329, but perhaps 1326, the start of Valdemar 3's interregnum, is a better theory. In his second period, Christoffer never regained his former power, and they ruled the country both during these two periods and the following kingless period: "From then on, the Germans' heavy yoke was created over Denmark," Jutland Chronicle writes, "and they possessed not only the land but also the castles of the kingdom, and the great men of the land, hoping that they should rule after Christopher's expulsion, were now subjugated by the Germans they had summoned. They were imprisoned and enslaved."