In April 1991 the American "Discovery Magazine" published a series of images of mysterious Mummies found in the sand of the desert of Taklamakan in the Tarim Basin in the Chinese province of Xin Jiang. They were dressed in clothes in bright colours. A baby had blue stones placed on the eyes.

A man with a big beard had deerskin boots. Women had high pointy "witch hats". It was the first time the Western World was made aware of the well-preserved mummies from the Taklamakan desert. 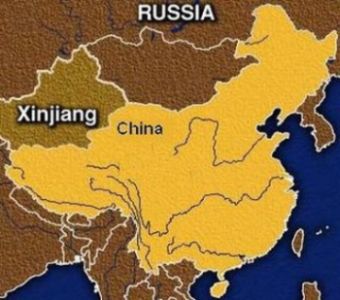 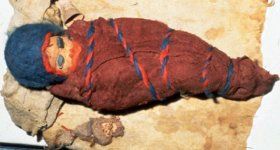 Left: The Chinese Province of Xin Jiang.
Right: A baby with blue stones on the eyes.

In this desert, it never rains, and this is why these mummies are better preserved than the Egyptians. In her book, "The Mummies of Urumchi", Elizabeth Wayland Barber told about this groundbreaking discovery. Today there has been excavated hundreds of mummies in the Taklamakan Desert.

The oldest mummies are from 2000 BC. Until the year 0, all of them are of the "Caucasian" type, meaning sharp nose, deep eye sockets, light skin, bright or brown hair, and, on men, strong beard. That means as Europeans are most. From year 0 and forward in time appear more and more Chinese, Tibetan and Turkish mummies.

One of the best known is the "Cherchen Man" found in Cherchen a few hundred kilometers west of Dun Huang. He was 2 meters tall, had a light brown beard and carried white deerskin leather trousers with felt lining and wool trousers and jacket. He died when he was 55 years in 1000 BC. 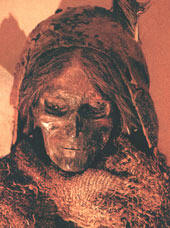 The Beauty of Loulan.

Another mummy is the "Cherchen woman" also from Cherchen, and she also died in 1000 BC as a young woman. She was 1.9 meters high. She had deerskin boots and a red woolen dress.

The most famous is the "beauty of Loulan", who died in 2000 BC. Her clothes were made of fur and wool, and on her feet, she had fur moccasins with the hairy side out. On the head, she had a woolen cap inserted with a big feather. There is some Indian style with her. She came from Loulan, a city that stood on the banks of the now-vanished salt lake, Lop Nor.

French and Chinese archaeologists have excavated a settlement in the Taklamakan desert. The place is today called "Kjumbulak Kum" and it is located not far from former Khotan.

From top down:
A couple from Kjumbulak Kum united in death.
A man has been buried with his bow.
A woman looks like she is sleeping. This she has done in 2000 years.
A woman buried with folded arms and bent knees.
Kjumbulak Kum, as it looks today. It is far out in the Katlamakan Desert.

The mummies which have been found in the desert have often "brown" hair and beard. Therefore one can assume, that the ancestors of the Aesirs, who came to Scandinavia, in general had hair and beard in brown nuances. The children could have been fair-haired as small ones, as many children still are. One might believe that the Tarim Basin was the original Indo-European homeland which Snorri called Midgard.

At least some Midgaard inhabitants have been quite high, as the Cherchen man and woman, respectively 2.0 m. and 1.9 m. 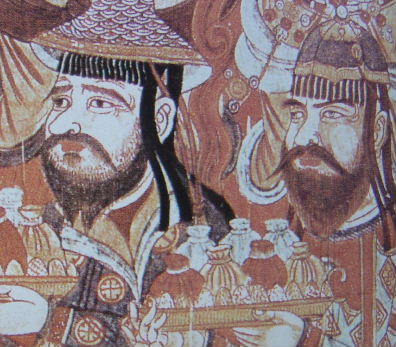 Two men, who bring gifts of money to a Buddhist monastery. Cave painting from Bezelik at Turfan, cave no. 20 from about 900 AC. Note the man on the right with blue eyes and a red beard.

In ancient China there was a tradition, that soldiers must be recruited from the nearby barbarian tribes. It was too dangerous to arm the Emperor's own subjects. It was the same as in the Roman Empire in the West, particularly special functions like stone slingers, archers and cavalry were often recruited from some nearby barbarian tribes. Sitting on a horse in full gallop without stirrup, doing archery and other weapon exercises, must have been extremely difficult. Only men coming from a culture, where they start riding as kids, could have done this successfully.

It is also how it must have been in Han Dynasty China. The cavalries, who sat on the back of the horses, who sweated blood, must in general have been recruited from the tribes on the plains. In China proper, there originally were no pasture opportunities for horses, and there has been no tradition for riding.

The picture shows a mural from Qizil near Turfan from about 500 AC. It shows the donors of the cave decoration with bright hair and white skin colours. The faces have been damaged, probably by the local Muslims.

Before the residents of the Midgaard of Tarim Basin became Buddhists, they most likely worshiped "the Great White Ruler of the West," as some early Qin rulers did. As told in the notes to "Three Kingdoms" Foreign Language Press. Maybe it was Odin.

Kho-tan was a city-state in that time Xin-Jiang north of the Kunlun Mountain Range along the southern branch of the silk road. It is now long time since buried in the sand. In the early first millennium, it was visited by the two Buddhist monks Fa-xian and Xuan-zang with a few hundred years in between.

Fa-xian visited the city around 400 AC. He told, that the people gathered in the streets to practice music. They were dressed in embroidered clothes, however some still used furs. He noted, that the King was a Westerner, and there were many Buddhist monasteries in the country.

Another Buddhist monk, Xuan-zang, visited the city on his return from India about 650 AC. They were very friendly people, he told. They made their living from farming and animal husbandry. The Khotan people valued music and dance highly. There were a large number of Buddhist monasteries in the country. The people were usually dressed in silk and other textiles; A few were still clad in wool and fur. Their writing characters were like the Indian characters, and their language differed from other languages. 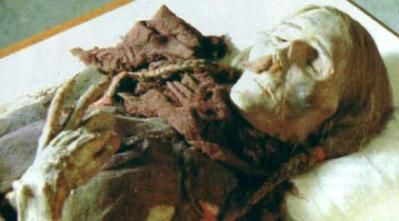 The Mummy of a man with moustache and plait from Xinjiang Uygur Autonomous Region Museum.

The people's own myth told, that they came from the Indian city of Taxila. They were descendants of the men, who had blinded king Asoka's son, Kunula, and therefore they had been displaced.

Khotan was one of the cities in the Tarim basin, which for a long time maintained it's independence. However, in the 700-800 AC, it was alternately dominated by the Chinese and the Tibetans.

Marco Polo visited the city between 1271 and 1275 AC. He told, that the people in the city "all worshipped Mothamet."

Today the city has long since been covered by sand. In modern times the surrounding area has been entirely populated by Chinese and the Turkish Muslim Uighurs.

Left: A wall painting from a Buddhist temple at Miran excavated by Stein in 1914, showing an angel with big eyes and red lips.
Right: Fair-haired bodhisattva from mural near Kucha.

The Japanese-Chinese Silk Road Expedition visited the remains of another city, Kucha, around 1980, at the northern branch of the Silk Road. On the Buddhist cave paintings, they recognized current Japanese musical instruments, that were brought to Japan with the Buddhist. There were stringed instruments looking like lute and mandolin, pan flutes and ordinary flutes.

The Buddhist monk Xuan-zang visited the town of Kucha on his way to India after holy scriptures about 650 AC. He wrote, that the music and dancing in Kucha surpassed all other nations.